Yuuki Shinomiya ( , Shinomiya Yuuki) is a main character and a male protagonist from Tokyo Xanadu. He is a first-year student at Morimiya High School.

A prodigy with an IQ over 180, and a Morimiya High School freshman who excels in programming and hacking. Although he is only 16, he has amassed a considerable sum of money through application development, stock trading, and the like, and lives on his own in a luxury apartment in the city. He has a full taste of the world. He is enrolled in school only to graduate and receive a diploma, and only attends school the minimum number of days required for credit acquisition. Because of this, few students are even aware of his existence. Yuuki developed a fortune-telling app for Xiphone called “As God says", which is popular among young people and students. However, it becomes the root of an incident he gets caught up in.

Yuuki has fair skin, reddish-brown hair and pale purple eyes. He wears glasses and the standard school uniform in a loose fashion. His attire consists of a white shirt and black blazer overlaid by his green jacket and headphones. He wears tailored black trousers and multi-shaded green shoes.

Yuuki is silent, cool and devious. He has a knack for technology due to his high IQ level and will crack a smile whenever possible. When around the party, he is usually the one to speak in a direct manner or remains quiet, waiting for a chance to rise up. It can often be seen that when he is around Sora, he is calm yet uncomfortable due to the lively, hard-working and cheery atmosphere she creates, as well as the fact the two are from the same year.

Yuuki’s fight with a long-handled hammer-like Soul Device called Calvary Mace, as well as the independent unit “Soul Peridium”, which Yuuki can freely control at his own will. Yuuki’s control of two Soul Devices is somewhat different from the rest of the main characters. His predetermined base elemental attribute is Steel Elemental. For basic attacks, with high power, Yuuki swings his long-handled Soul Device around and unleashes an attack. It has a fairly good reach and attack power, but due to being heavy, its speed is considerably slow. In battle he is usually paired up with Sora. 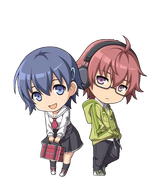 Retrieved from "https://tokyoxanadu.fandom.com/wiki/Yuuki_Shinomiya?oldid=5796"
Community content is available under CC-BY-SA unless otherwise noted.