"ー教えてあげるわ。アイドルの“想い”がどれだけ強いかをね……！"
"--I think it's time you learned just how strong an idol can be!"

Rion Kugayama ( , Kugayama Rion) is a main character and a female protagonist in Tokyo Xanadu. She is a second-year student at Morimiya High School. She is one of Kou Tokisaka's partners and a solo character like White Shroud in Tokyo Xanadu eX+.

Rion is a popular second-year high school student, an idol with coquettish looks and behavior. She is a member of the five-girl idol group SPiKA, and armed with her talented skills as a singer, is in dispute with two girls of the same group over the center position. Despite her light appearance, she is a hard worker who hates to lose, and polishes her performance daily through lessons. When other people are around she acts completely devoted to her idol life, but on her own she reveals her true self, and once someone has seen that, she acts defiantly towards them.

Rion has fair skin, pink hair and amber eyes. She is usually either seen wearing her school uniform or her SPiKA idol costume. Her uniform cosists of a beige and lined long-sleeved sailor top, a yellow bow, a short black skirt, black socks and brown school shoes. She ties her hair into a curled side-ponytail at both school and work.

Her SPiKA outift consists of her wearing a crown bobble-band, representing her as the lead singer, a white shirt with a blue checkered and buttoned top over, a light-blue ribbon, an arm band on her right arm and white gloves. Her lower half is made up of a frilly blue skirt attached to a belt, matching her top, a leg band which opposes her arm band and finished off with long wrapped-white boots.

When in public, she usually wears a disguise, namely glasses.

Rion is a generous and heartwarming character, although she appears to be condescending and a bit of a show-off to other students, typically male, due to her status as an uprising idol. After introduced to the other main characters, she is shown to be very open and cares a lot about the other members. She also develops a unique friendship with Shiori, sometimes in conversation with her and Asuka during class activities.

Rion fights using her soul device, Seraphim Layer. Her device grants her wings which she uses to create slash attacks. Her primary elemental attribute is Wind Elemental and is also the only character who can fly by default, as well as causing mass aerial combo. In her story battle scenes, she is usually paired up with Kou. 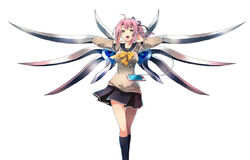 Retrieved from "https://tokyoxanadu.fandom.com/wiki/Rion_Kugayama?oldid=5798"
Community content is available under CC-BY-SA unless otherwise noted.