Rem (レム, Rem) is a sub character in Tokyo Xanadu. Rem is from a race known as Greed and is a mysterious being who speaks in a boyish tone and calmly wanders the Other World. Often referred as a female, she is well-regulated with androgynous features, but her actual nationality, gender, and age are unknown. It is not even known if Rem is human.

Often known as the "Child of Eclipse" because of her connection to it. Rem is sometimes thought to be an enemy and friend. However her sole intentions are only to test the X.R.C.'s abilities against the Eclipse.

She has a glowing, transparent-like body, and thus appears to be a being between that of the real and Other worlds.

Rem is known by the Underground as the "Child of Eclipse" for her connections to the "Eclipse". She may sometimes be devious against the X.R.C but she only wanted to try their abilities. She is also close to Kou's grandfather, Sousuke Kokonoe, who have also knew her from the Tokyo Disaster. 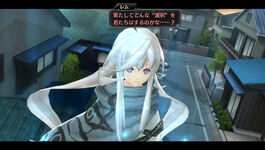 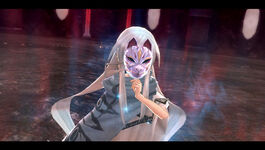 Retrieved from "https://tokyoxanadu.fandom.com/wiki/Rem?oldid=5840"
Community content is available under CC-BY-SA unless otherwise noted.