"《ゾディアック》の一員としてではなく…… “北都美月”個人として協力させて頂けませんか？"
"I'd like to help as myself, and not just as a member of Zodiac."

Mitsuki Hokuto ( , Hokuto Mitsuki) is a main character and a female protagonist in Tokyo Xanadu. She is a third-year student at Morimiya High School and the president of the student council.

She is the student council president of Morimiya High School and daughter of the “Hokuto Group,” Japan’s leading enterprise. Generally, she has a kind and calm personality, but she’s also skilled in the art of negotiation thanks to her leadership studies. Mitsuki’s father was supposed to succeed the Hokuto Group, but he died. Her grandfather, the current president, anticipates Mitsuki to take his place, and drags her into the issue of who will be the successor. She seems to have some knowledge of the relationship between “Zodiac” and the Other World, as well as the organization Asuka belongs to.

Mitsuki has long blue hair, fair skin and pale amethyst-pink eyes. She has a slender, yet busty appearance. Like a majority of the characters, she is often seen wearing her school uniform. Her uniform consists of a black long-sleeved top, a white tie and the red student council band on her left arm. Her lower half consists of a black sailor-style dress which matched her uniform, long black socks and the standard brown school shoes.

Mitsuki is a very kind and heartwarming character. As the president of the student council, she suits up to her role. Mitsuki generally tries to negotiate before any matters become serious and sometimes has her disagreements with the other party members. Despite this and being a member of Zodiac, she still follows the path she feels right and will cut down any obstacles from reaching her true destination.

Mitsuki fights using her Soul Device called Mystic Node. Mitsuki’s basic attack fires several magic bullets from the ends of her cane-like Soul Device. These bullets diffuse radially, which make for a greater attack range. Her base elemental attribute is Shadow Elemental. Since several magic bullets will simultaneously hit even when firing at point-blank range, depending on how its used, just her basic attack can provide enough fire power. In battle she is usually paired up with Shio. 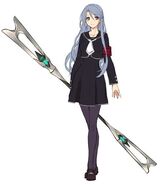 Retrieved from "https://tokyoxanadu.fandom.com/wiki/Mitsuki_Hokuto?oldid=5799"
Community content is available under CC-BY-SA unless otherwise noted.