"重ねて言うわ。これ以上、立ち入るのは止めなさい。"
"I'll tell you one more time. Stay out of this."

Asuka Hiiragi ( , Hiiragi Asuka) is a main character and a female protagonist in Tokyo Xanadu. She is a second-year student at Morimiya High School and is one of Kou Tokisaka's partners.

At the beginning of the game she serves as a guide, using her knowledge of the other realm to aid the party.

She is Kou’s classmate and a returnee from the US. Though she has the treasured trifecta of good looks, great grades, and superb reflexes and is well regarded and trusted by her fellow students, it is all merely an act. In reality, every night, on orders from an organization in possession of Soul Devices, she investigates incidents related to the Other World.

Asuka's position is a "Rookie Enforcer" of the underground group "Nemesis" who is assigned for Morimiya City. She is seen being opposed on cooperating with the "Zodiac" on "Eclipse" incidents happening in the city because her missions are still treated as a trial on their organisation. Although, with the help of Kou's stubbornness and persuasion, she agreed to join the amateur group of Soul Devise users on investigating the Eclipse incidents.

Asuka has fair skin, light-blue eyes and long, orange hair. She is usually seen with her school uniform on which consists of a black sailor-style style uniform, a white neck-tie, as well as long white socks and black boots. She carried a holster on her left leg for her soul device.

Asuka is a very calm and collected girl. She has excellent manners, a ladylike aura to her and is social towards her classmates. She likes little animals and can often be seen becoming flustered due to a remark made by her comrades. 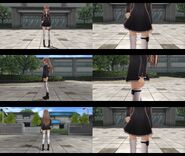 Retrieved from "https://tokyoxanadu.fandom.com/wiki/Asuka_Hiiragi?oldid=5801"
Community content is available under CC-BY-SA unless otherwise noted.